LEARN HOW EDWARD EARNED HIS FAA PRIVATE PILOT IN 5 DAYS 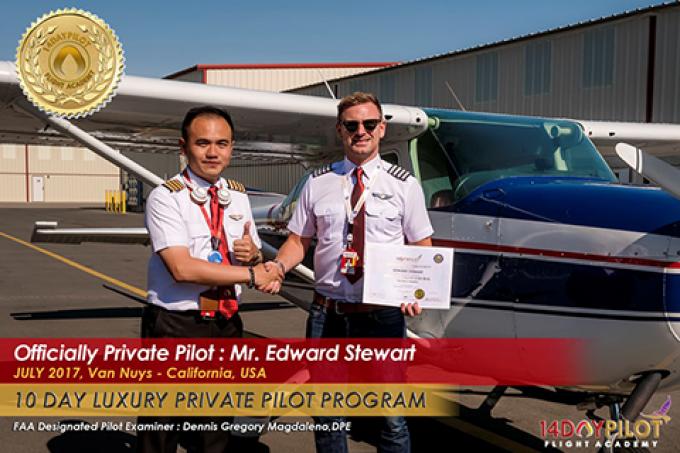 Edward Stewart, ex British Special Forces, that retired early to chase his dream of being a pilot. He received his FAA Private Pilot license on July 31, 2017 after only 5 days of training with 14DAYPILOT. He started flight school in the UK and continued to a flight school in California, acquiring 120 hours of flight time. Due to delayed training, and busy instructors, Edward decided to join 14DAYPILOT to complete his PPL course.

The flight training started on July the 26th 2017 in Van Nuys, California – USA. His flight instructor Capt. Gilbert Rousseau, MEII, CFII-R, who has more than 8,000 hours flying experience setup a very intense check ride preparation for Edward who only has 5 days to complete the training, also supported by the 14DAYPILOT chief pilot, Capt. Gema Goeyardi for the oral exam preparation course.

The Prepcourse was tough and demanding, as Edward only had 5 days to achieve his private pilot license. The course had obstacles and Edward had to make sacrifices in order to achieve his dream of becoming a pilot. He studied for 10-12 hours a day and didn’t give up in his goal. He started the prepcourse on the 14th of July 2017 and finished on the 22nd of July 2017.

After completing the prepcourse, Edward started flight training on 26th of July 2017. His first flight with 14DAYPILOT was with Capt. Gema Goeyardi and Edward reviewed all maneuvers and procedures just like a checkride. After 4 days of flight training, Edward had flown for 15 hours and was ready for his checkride. He said that the training was one of the most challenging experience of his life, but felt satisfied after completing it.

His check ride was on the 31st of July 2017, Capt. Dennis Gregory Magdaleno was the FAA designated pilot examiner. As a standard procedure, the examiner verified his logbook and did the IACRA registration.

Edward felt very confident and determined to achieve his dream. He completed the oral part with ease, and went on to the flight part of the checkride. Everything went well and the examiner was very happy with the way Edward controlled the aircraft. Edward walked out of the aircraft with one of the biggest smile on his face, knowing that he finally achieved his dream, that he was officially a pilot.