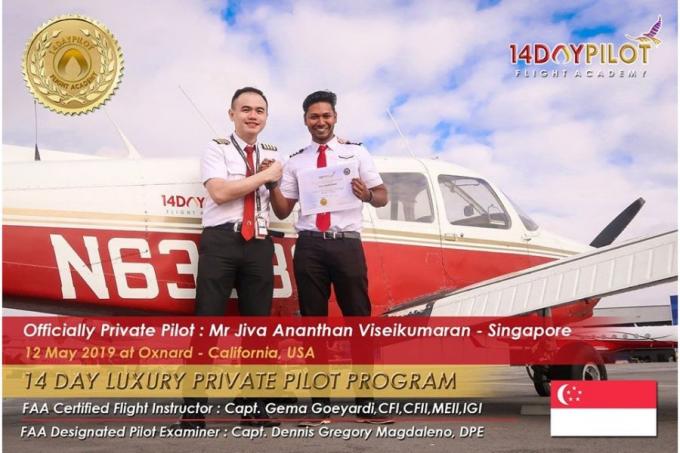 Jiva Ananthan Viseikumaran is a Singaporean Army Captain who became a student of 14DAYPILOT Flight Academy taking the Airline Pilot Integrated Training program available. His story began with a series of intensive trainings done in the country of Indonesia for his preparation class. Afterwards, he flew to Los Angeles to undergo his flight training in Van Nuys Airport, California and did his Private Pilot examination in Oxnard, California. 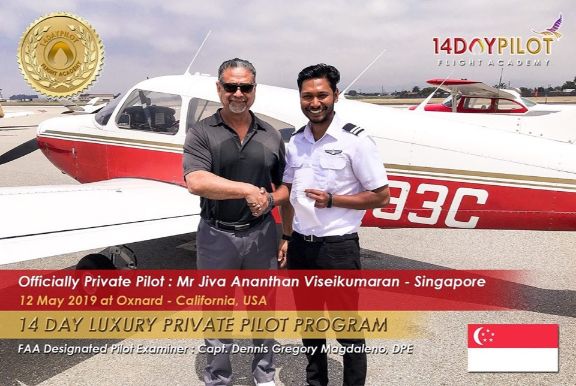 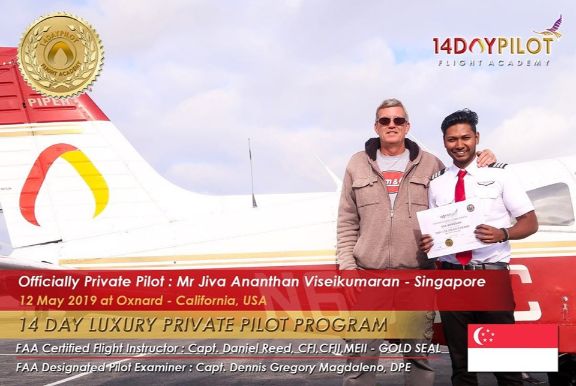 The Airline Pilot Integrated Training (APIT) program was designed specifically to train prospective pilots for a career in the airline industry. With the APIT program, candidates will be obtaining a Private Pilot License (PPL) along with Instrument Rating (IR) followed by a Commercial Pilot License (CPL) with Multi Engine Rating (MER) and 65 hours of flight time by the end of the candidate’s training with 14DAYPILOT Flight Academy.

Jiva’s first steps of the APIT training is to receive his PPL within 2 weeks. Once this has been conquered, he will continue on to the Instrument Rating training where he will be able to fly using instruments. Afterwards, Jiva will eventually move on to the Commercial Pilot License stage along with the MER training. The overall time period of the flight trainings will be 115 days which is a much lower sum compared to the hefty one year period of time taken just to get the Commercial pilot training syllabus done and over with. 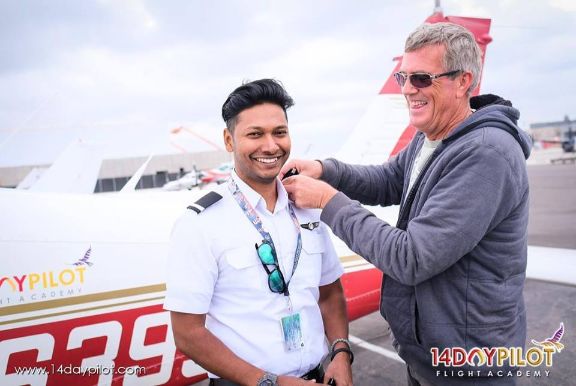 Initially, Jiva Ananthan has had to undergo a course of ground training in Indonesia where he joined the Pass Oral Exam System (POES) program, trained by instructors Johan Faizan, AGI and Capt. Gema Goeyardi, CFI, CFII, MEII, IGI. Jiva spent a total of 29 days in Indonesia in which he spent his time training in flight simulators for an overall time period of 50 hours and preparing for his written and oral exam done in the USA. Jiva trained everyday from 9 am to 10 pm with no day offs, even on Sundays. 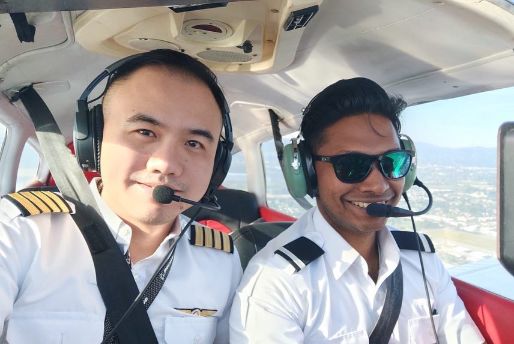 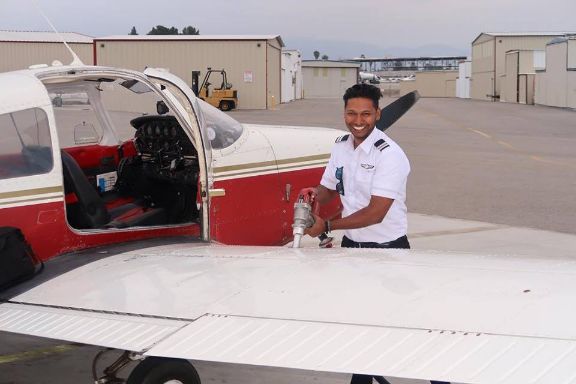 Upon completing his ground training, Jiva then flew to USA, more specifically Los Angeles, California to begin his flight training and complete his written and oral examinations. With this being said, Jiva Ananthan has passed his PPL written examination with an incredible score of 95% on. Due to this, Jiva began flying for the first time on April 9th, 2019, with his senior instructor, Gold Seal Capt. Daniel Reed, CFI, CFII, MEII. 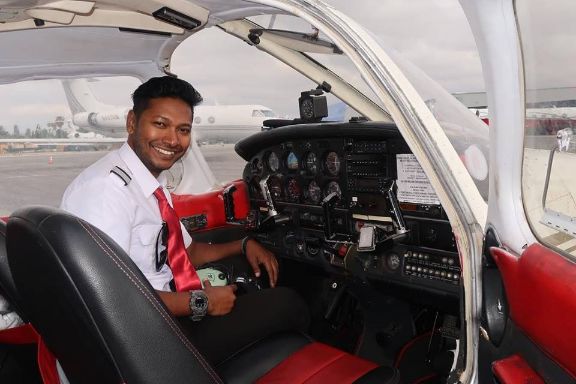 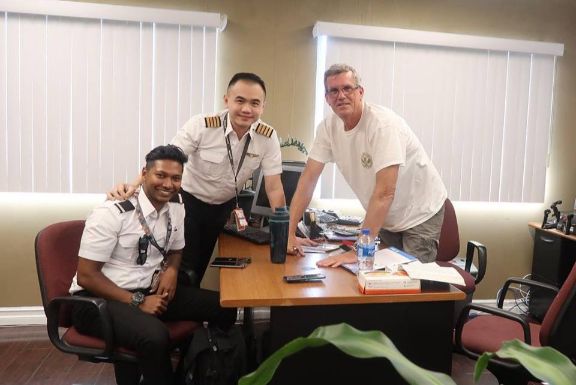 By showing his enthusiasm in the program through his hard work and determination, Jiva, undoubtedly, was released for his first solo flight early on in his training, a certain aspect that is aimed by 14DAYPILOT Flight Academy for each and everyone of their students. After only 5 days of flight trainings, days required to master landings and manoeuvres, he completed his first solo flight on April 16th, 2019 in Van Nuys Airport, California - KVNY where he was released for his solo flight by Capt. Daniel Reed, CFI, CFII, MEII.. Thereupon, Jiva had to prepare for his upcoming check ride with his FAA examiner, Capt. Dennis Gregory Magdaleno, DPE.

One of the requirements needed to obtain a Private Pilot License (PPL) is that the applicant needs to complete a SOLO Cross Country flight with a total straight-line distance of 150 nm. Jiva smoothly completed his cross country flight and swiftly moved on to the next stage of his course. 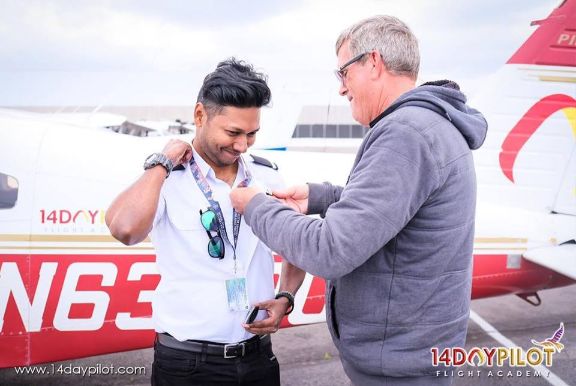 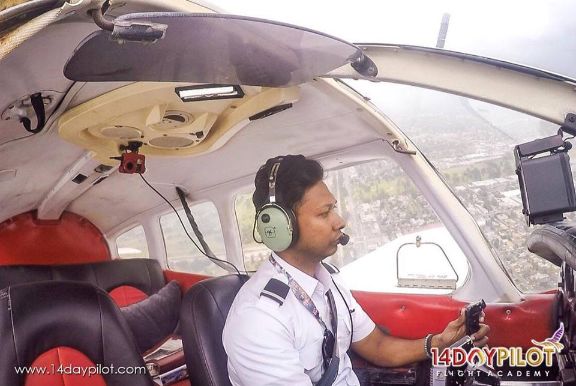 The day every pilot awaits has finally arrived. Jiva has prepared for this moment long and hard, training for hours on end daily. With all the requirements in hand, Jiva is ready to face the exam. After 2 weeks of flight training, Jiva underwent his check-ride in Oxnard California, evaluated by the FAA Designated Pilot Examiner, Capt. Dennis Gregory Magdaleno, DPE.

On 12 May, 2019, Jiva passed his check-ride on his first attempt! He answered each and every question for his Oral examination smoothly and did very well on all of the flight examination portion. The oral examination has been part of his preparation since the beginning of his training as part of the Pass Oral Exam System (POES) that was specifically designed for this. For his flight examination portion, Jiva confidently flew the Piper PA28 N6393C during his examination and impressed his FAA Designated Pilot Examiner with his incredible flight. Jiva has now officially received his Private Pilot License.

Without further ado, Jiva will continue on with his journey towards IR and CPL along with his MER to complete his Airline Pilot Integrated Training (APIT) program. Currently, Jiva is working hard once again with his trainings to prepare for his FAA Instrument Rating (IR) and Commercial Pilot Check-ride. To continue following Jiva’s journey towards Instrument Rating, keep an eye out for our updates. 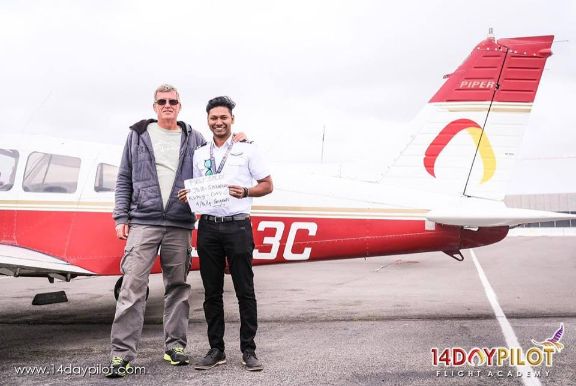 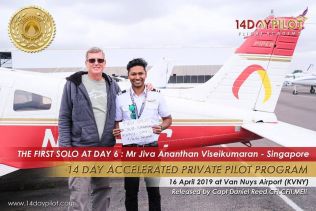